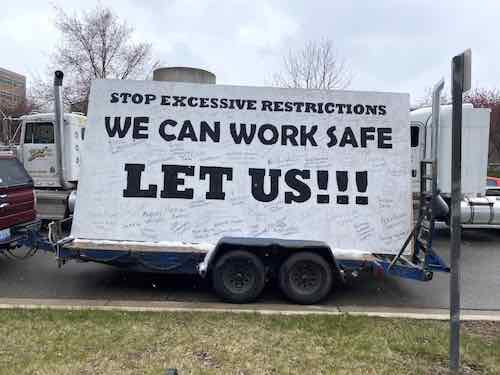 So I went the protest against Governor Whitmer in Lansing. That is to say, the aptly dubbed Operation Gridlock. I think it was a pretty effective protest! Peaceful, with many, many people showing up in the cold, rainy weather.

Not to get out of my car and risk inhaling other people’s bad breath, Covid-19 or anything ridiculous like that. I was not careless in my approach to the health of other Michigan residents, I simply was not. And many of the people around us were not putting anyone’s health in jeopardy.

We didn’t walk around with guns strapped to our chests, although personally I am fine with those who have the right to carry weapons in this country if they want to.

Our family went to protest the trampling of Federal Constitutional rights.

The right to enter into contracts, to earn a living, to assemble and live your life without governmental over-reach.

Yeah, its a health crisis – we know. Shut the f*** up about it already, we know. That is what the Governor simply doesn’t get. She forgets, she is NOT the only smart person in the room. We are not morons, pawns that must be given grain and told how we are to grind it or we would starve.

I had a conversation with a retired Union boss acquaintance from General Motors. He was FURIOUS that we went to the protest. How dare we? How selfish could we be?

I guess its fair to call us selfish. If protecting one’s Constitutional rights, the very foundation of this nation is selfish, I am selfish. And if standing up to government over-reach with civilized civil disobedience to prevent something like the scenario below, label me selfish.

“Those who would give up essential liberty, to purchase a little temporary safety, deserve neither liberty nor safety.” – Benjamin Franklin

Let’s suppose the Governor decided to really protect us. As a result of that mission to protect, to separate the kids from the adults. Let suppose that was the new order. That now we’re are going to have a very “protected” society, would that be okay dear Union boss? Okay that Governor Whitmer’s “order” takes our children away to keep them healthy? Get your head right.

When I have conversations like that and watch them roll their eyeballs at the absurdity of such a crazy idea, for a moment, I think, hey maybe she is right. Maybe people ARE so stupid they must be controlled to this extent. And then that horrifying thought is gone.

Or let’s go in a different direction…

Imagine 6 months ago, if were sledding or skiing or drinking coffee or basking in the sun in the South and I proposed this. And suppose we get hit by a virus that causes a great deal of death and heartache and President Trump issued an order, you can’t buy seeds, garden equipment, go boating with your family (even if a last hoorah). What if that order came down and could you imagine the protests that would happen then?

Her order is beyond ridiculous. And as a result, Governor Whitmer is now walking it back now while trying to dance a careful dance to save face. Meanwhile, our fine State of Michigan has, with that one day of protesting ignited protests across the Country.

After that, the tone has changed. And the people are starting to speak, united.

To sum it up, the people have a message. Most importantly, u\se caution dear politicians with a political agenda, the people en masse are watching. Remind yourself on that Governor Whitmer stationery or post it note, we the people, are not stupid.